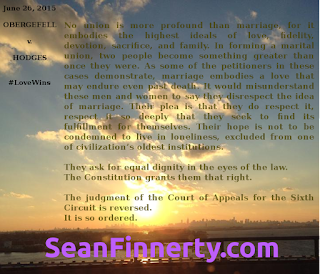 deBlasio Over Delivers To NYPD, Undercuts His Promise To Voters 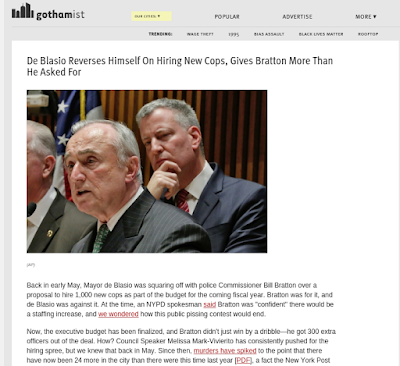 In deBlasio's 2013 campaign there were implicit promises made regarding police reform and an implicit promise with Dante deBlasio being the face of the most effective campaign ad, that Bill deBlasio would be a mayor that understands and empathize with people of color. His recent turn around on policing and a double down on Commissioner Bratton's and PBA President Pat Lynch's desire to turn the city's open society (nearly anarchistic culture) into a police state with unchallengeable and criticism-free police officers.

In a democratic and free society, the individuals not only has a right to challenge authorities but an obligation to constructively criticize authority and those that implement the policies that were supposed to the will of the people in the first place. If the people demand that the local constables harrass and bully their youth, then constables should follow that course. On the other hand if the only the privileged want the unprivileged to be harassed indiscriminately the unprivileged have the right to redressed their concerns to their government through their elected representatives, which is the intrinsic campaign promise deBlasio ran and won with in 2013.

deBlasio may be campaigning nationally on a income inequality message, but this most recent reversal is undercutting whatever progressive cred he may have had as a candidate. I would also want to remind everyone that it was deBlasio and his campaign manager Emma Wolfe that strong armed robbed the WFP nomination on behest of Cuomo despite never intending to hold Cuomo to his promise to deliver the State Senate back into Democratic control; as Cuomo had already promised Senate Majority leader that he would retain the Senate chamber.
No comments:

by Sean Finnerty @ 1:20 AM
Nine Killed in Shooting at Charleston Church http://nyti.ms/1dLv95b
No comments:

US Determined To Poke The Russian Bear

The American military seems to want to instigate an aggressive Russian response. When the Soviet Union collapsed, and the Warsaw was scrapped, the western democracies promised not to encroach on the Russian federation; within a decade NATO began including former Warsaw Pact nations and former Soviet Union Republics into the military alliance whose purpose of existing was to prevent Soviet domination.

The former Soviet Republics should have formed an independent mutual defense alliance that didn't rely on Russia nor the Western democracies. NATO, with its raison d'etre becoming obsolete, should have been scrapped along with its cold war nemesis the Warsaw Pact.

Rather than have peace through strength, NATO lead by American Chicken Hawks, are determined to have a pissing match with a belligerent nation in possession of thermonuclear weapons.

2 Out of 3 Texas Cases Led To Mass Murder; The One that Had Zero Death Toll Is The Only Case With Police Tossing Citizens Like Rag Dolls.

by Sean Finnerty @ 12:33 AM
Waco Texas saw a conclave of criminal biker gangs that led to the deaths of 9 people. The aftermath, the participants of the fatal brawl were calmly placed together and were free to use their cell phones; number of body slams by the arresting officers zero.

Teenager "borrowed" a pick up truck illegally packed a bunch of friends into flatbed of said truck drank alcohol to excess then got behind the wheel and killed 4 people from the inevitable underaged drunk driving accident; number of body slams by the arresting officers zero.

Teenager hosts a pool party at her family's condo shared pool, 2 adults start a fight with teenagers (according to witnesses) and McKinney police officers arrive to bring "law and order" to the pool party well after the fight had been resolved and ended. Cpl. Casebolt runs through the dispersed crowd of invited party goers like bull in a China shop, eventually body slamming 15 year old girl to the sidewalk for no apparent reason. The same bikini clad girl can be seen wandering past the manic police officer confused to what was occurring earlier in the video. Some apologists have defended Cpl. Casebolt and claimed he was "endangered", because a ten year veteran police officer is no matched for a girl in a bathing suit.

THERE IS SOMETHING SERIOUSLY WRONG WITH TEXAS AND IT TOTALLY NEEDS TO BE MESSED WITH.
No comments: