"Fair and Balanced" coverage of the Supreme Court...just hours later 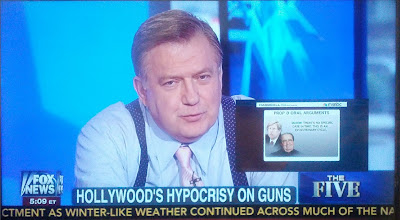 Though several hours after oral arguments ended for the Supreme Court hearing the Hollingsworth v. Perry case that may decide the constitutionality of gay marriage bans, Fox News make unusual decisions in their coverage. Initially I flipped between the three 24 news channels, and noticed that CNN & MSNBC covered it live while Fox News continued to cover less immediate stories such as replays of CPAC speeches and Amanda Knox being retried in Italian court. After several hours away from my TV I came back and MSNBC was going over the transcripts of the oral arguments; which made think 'wonder if Fox News ever covered the story at all?' Above is the screen grab of my television with MSNBC in lower right-hand picture-in-picture and Fox News in full screen. After watching Fox News discussed some Jim Carey "rant" against guns, I realized Fox News isn't going to discuss the likelihood that the Supreme Court will not strike down the lower court's decision and upholding Prop 8 ban of same gender marriage. I then checked out what the hullabaloo over Jim Carey, I give you the Funny or Die video that sparked it all below:

Both the video and the twitter posts were from March 24th, two days ago, not particularly breaking news nor was the following story a repeat of the Amanda Knox retrial story. It isn't that Fox News never mentioned the Supreme Court oral arguments but not covering the press conference live is a large failing for any journalistic organization... good thing Fox News is not associated with all aspects of journalism. FoxNews.com did post it up as the leading headline story for the day, and accompanied a video that appears to have pended on Supreme Court releasing the audio file of the oral arguments. Fox News used b-roll of opposing sides chanting outside of the Supreme Court but couldn't have the same camera crew pointed their camera towards David Boies and Ted Olson when they came out of the highest court of the land? If the opposing attorney Chris Cooper wanted to avoid the cameras, that doesn't preclude interviewing the two attorneys that had  argued opposing sides for Gore v Bush but now are on the same side.

It appears that Fox News chose not to show anything live, leads me to believe that if they can't edit the footage they are not going to let go on air.