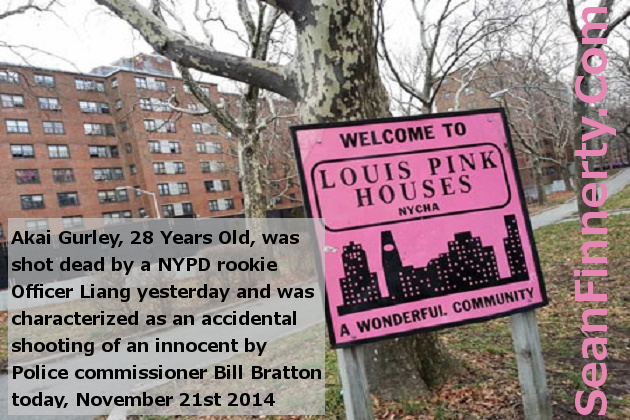 Commissioner Bill Bratton claims that the tragic death of Akai Gurley was "accidental" and that the victim of the police accident was an innocent. Though all the details have yet to have been made available, some details have been such as the fact that only Officer Peter Liang had unholstered his weapon and his partner was also a rookie officer. Why Peter Liang felt that his life was endangered by merely being in public housing to point his weapon and fire it at the first sight of movement has yet to be explained. What we can surmise from this is that white privilege (of which I am benefactor of) is trumped by blue privilege that the benefit of the doubt will goes towards the police no matter how many times they committed acts that remove any doubt such as the 600,000 incidents of police harassment every year under the guise of "stop-and-frisk."

The deficit of trust that has been caused by the overzealous police force that routinely escalated situations rather than de-escalate; to demonstrate a show of force rather than deliberate enforcement of law; to have sought out an adversarial relationship with the community that the police are tasked to protect. The past actions of the NYPD has done such irreparable harm to the expectation of justice that it begs the question "If the police create more injustice than justice in the city, why keep the police around at all?" I'm not entirely comfortable with a AnarchCapitalism perspective, especially when dealing with crime prevention and civil protection is concerned, but with the barbarism that is provided by the NYPD and police forces nationwide that would rather be violent than just, I am becoming more and more open to the idea of competing police forces or even for-profit community police.

Being a white cisgender man, I am allegedly the benefactor of the white privilege that is buttressed by force of the actions of the NYPD, but it doesn't actual benefit me beyond not being victim to police harassment. I acknowledge that not being harassed by police is nothing to sneeze at, but if I live in a city where tax dollars are being spent to physically and psychologically harm large swaths of my fellow New Yorkers that actually harms me as well since these fellow New Yorkers being treated like criminals as part of some "collective punishment" for being people of color causes moral hazard for those begin to internalize the identity of a criminal. It is akin to the Stanford Prison experiment, where middle-class white kids randomly assigned roles as prisoners and guards within weeks to heart those roles and began to harm each other just as expected between adjudicated prisoners and supposed correctional professionals. Now if we were to carry out the Stanford Prison experiment further onto a larger population say the African-American community of New York, would those that are treated with brutality, disrespect, and as subhumans by public employees going to encourage courteous and civil behavior? If upper class and middle class Stanford students are susceptible to such transformation in a couple of weeks what of it when hundreds of thousands of people are exposed to maltreatment throughout their entire lives? And what of the officers, are they not irreparably harmed to carry out orders that intrinsically dispose of their own humanity and their own compassion that is necessary when dealing with erroneously presumed criminals?

Each police officer would be better off psychologically and spiritually speaking if they carried out their duties with respect towards all New York City residents, and in turn the residents (if the officers were in large part above reproach) would justifiably give every police office the benefit of the doubt as well as participating in a collaborative effort in keeping our city safe. That beneficial transformation has to start on the side of those cashing paychecks not the ones that are paying the salaries from sales taxes and property taxes (albeit indirectly if via rent). If the police are unwilling to restrain themselves from overt dehumanizing policing, then we should as a city seriously look into a alternative means of providing civil protection that does not include the NYPD.