Complaints Regarding Ferguson Were Unmerited And It Is A Cesspool Of Racism? WTF 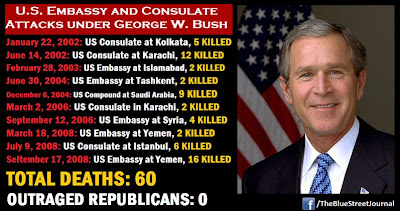 Earlier this week, Washington Post columnist Richard Cohen attempted equivocate the conservative delusional belief there was a scandal associated with the September 11th 2012 attack on American diplomatic post in Benghazi and the systemic often violent interaction between police officers and the communities of color they are sworn to protect. 22 other Diplomatic outposts throughout the Arabic speaking world were alerted to possible threats to security on September 11th's 12 year anniversary, and the disloyal opposition party chose to be opportunistic on a tragedy that had actually played itself out ten times under George W. Bush while he was in office. But to stipulate that the people of color and their allies who are outraged that police routinely overstep their duties of enforcing the law and become bullies with badges is not the same as an internationally held belief throughout the Arabic world that America is the "Great Satan" and routinely has American consulates under attack. The facts be damned is what is central to anyone that finds some especially scandalous about the handling of the September 11th 2012 attack on Benghazi, this I agree with Cohen, to also believe that the scandal of the American police nationwide frequently escalate situations into violence is not fact-based fully detached from reality. Below are a couple excerpts from Cohen's article that I find contradictory:


Did the Justice Department later find that Ferguson’s police force was a cesspool of racism, incompetence and corruption? Yes.

A grand jury studied what happened and did not indict Wilson. Eric Holder’s Justice Department reached the same conclusion. Let me offer another conclusion: If Brown was not criminally shot because he was black, then possibly the cop was accused because he was white. Who was the stereotyped individual here?

The emphasis on Cohen's 'if'' was my own, as I believe that the St. Louis county prosecutor Robert McCulloch sought to exonerate Officer Darren Wilson with a landslide of extraneous evidence and witnesses that were not qualified nor vetted by Mr. McCulloch, and was characterized by Cohen's colleagues at the Washington Post as being an unusual approach in the Darren Wilson grand jury process. McCulloch also heavily relied upon Witness #40 who he later admitted "clearly wasn't present when this occurred", the only witness that  corroborated Officer Wilson's testimony based her entire testimony on media reports of what Darren Wilson claimed had occurred. Ferguson is the shorthand of the outrage left, while the Benghazi is the stand-in for those on the right? Except the rage targeted around Benghazi had the investigation carried out by exactly the people that wanted to claim some horrible calamity that would make President Obama (better yet Secretary of State Clinton) culpable, the Republican controlled House of Representatives concluded that all wished upon claims of malfeasance were unfounded. The targeted rage of the left that police routinely and criminally culpability treat unarmed people of color with a disproportionate level of force that goes unchecked because those responsible for prosecuting do not wish to punish law enforcement officers of any act of violence, resulting in McCulloch in St Louis and Donovan in Staten Island doing whatever was within their power to fail in getting an indictment from a grand jury. Grand juries not returning an indictment are rare, rarer still are those possibly being indicted testifying to the grand jury as if they are cooperating witnesses. If that sort of privilege was extended as matter a of common practice then we would never see anyone but those that confess to their crimes be indicted!

Cohen falls into the extremely lazy and prevalent practice of punditry and self-appointed intelligentsia claiming that both left and right are equally guilty in an attempt to be neutral. If sports reporters were ever to follow political "opinion makers" such as Washington Post columnists, we would never know who won football games or if basketball players beat the shot clock since we would have sports columnists interview both sides and declare that they both had a "great game" and that both sides "did the best they could" along with other pablum that fills locker room post game interviews. Neutrality isn't the goal and nor does it serve the reading audience and the general public; neutrality is not a synonym for objectivity. Objectivity is able to provide context to a narrative, neutrality is banal and is offensive in exactly how it tries not to challenge of offend the general public with new facts.  New facts, are going to be offensive to those that have gotten cozy with their demonstratively wrong old "facts", and it is up to those employed by the news media to offend the people want to desperately hold onto their moldy old-erroneous-perspective regardless to how the world has changed or even if the world had never been congruent with their worldview.