Questions Not Asked In the CNBC GOP Debate 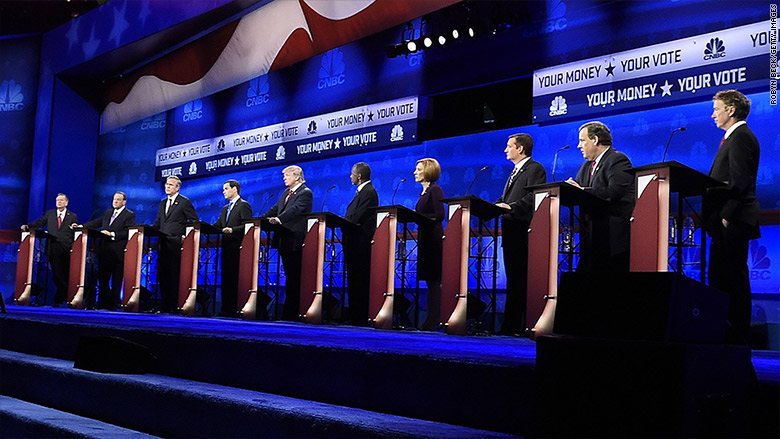 Q: Mr. Trump, you threw out Jose Ramos for asking a question out of turn, that question was how would remove 11 million human beings from the country?

Q: Dr. Carson, you described that the Holocaust could have been avoided had the Jews of Europe only had access to guns. In a scenario where 11 million individuals are being forcibly removed from the country, and they have access to guns wouldn't this bring about your imagined scenario to life in modern America?

Q: Ms. Fiorina, you were fired from HP with much fanfare and a golden parachute, then lost a landslide election in California, are simply failing upwards in your run for president?

Q: Governor Bush, your family's reputation and name is seen as your greatest asset, and yet other than fundraisers you have not utilized your brother the lone living 2 term Republican president. If his electoral success and his presidency is not to be emulated why not, if it is then why not campaign with your brother?

Q: Governor Christie, has your bi-partisan success with a Democratic controlled state legislature was entirely based on your negotiating skills why did your political appointees and underlings carry out political retribution (for example the George Washington Bridge traffic study and Sandy Recovery funds being withheld)? If they did all of this without your consent or knowledge, how is the American public supposed to be confident that you could lead or have knowledge of what is going on within the Federal government?

Q: Senator Rubio, early in your Senate career it was reported that you problems with personal finances, purchasing luxury cars and a $80,000 boat, all awhile covering expenses with Florida Republican Party funds and credit cards. Why should the American people believe that you would be a good steward of the public treasury when you have troubled personal finances?

Q: Senator Cruz, if President Obama were born in Kenya and not Hawaii, in your opinion would that negate his claim to being a legitimate president? If so why would still be eligible to become president being born in Canada to an American mother and non-American father (just as Obama parentage is)?

Q: Governor Huckabee, the U.S. Constitution explicitly states there can not be any religious tests and the 1st Amendment states that the government shall not establish a religion. How do square this with your stated belief that America is a Christian nation and that religious freedom can mean that elected officials can ignore law if it conflicts with sincerely held beliefs (such Kentucky County Clerk Kim Davis)?

Q: Senator Rand Paul, is Edward Snowden a patriot that committed a crime for the greater good of informing the American public or merely a criminal that stole classified materials and weakened national security?

Q: Governor Pataki, Governor Gilmore, Senator Santorum, etc al, when are you going to drop out of the race?