Unanimous Supreme Court Decision: Too Bad There Is No Means Of Enforcing It In Majority Of The States 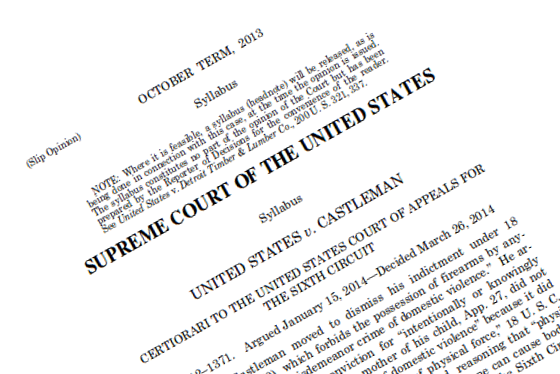 Common sense prevailed this week deciding that those convicted of domestic violence forgo their 2nd Amendment right to bear arms, and with a unanimous decision. Convicted violent criminals can be universally understood, at least by reasonable individuals, to be individuals that can not be trusted with firearms. This comes along with criminal stats that 94% women who are murdered are victims of a male perpetrator were known to them, and two thirds of all murders from the same FBI statistics are committed with firearms. Firearms utilization in two thirds of American homicides has been a consistent percentage within the FBI statistics for nearly a decade, undercutting the primary argument for gun rights advocates that access to firearms isn't determinative to effect homicides. Though if firearms couldn't kill people effectively, the Department of Defense should see if they can get a refund for all of their small arms.

The Supreme Court decision barring convicts of even a "misdemeanor domestic assault" charge is enough of a violation to legally posses or purchase firearms. This is clearly a decision with 2nd amendment's "to ensure security" in mind rather than the "right of the people to keep and bear arms" clause. I still hold the belief that writers original intentions of the Second amendment was intrinsically tied to conscripted local militias to ensure slave revolts would arise (often refered to as 'slave patrols') and the since the passage of the 13th amendment alleviated the original intentions that necessitated the 2nd amendment it would be perfectly within a state's right to ban all firearms similar to the universal ban of firearms in the Wiemar Republic after Treaty of Versailles until 1928 when a firearms registry was instituted and that was done away with in 1938 (for all of those that believe Nazis against gun rights, they actually did the opposite in 1938, stop believing that misguided claptrap).

But on to the actual point, so the Supreme Court ruling that those convicted of non-felony violent crimes would be included being barred by Federal statute from buying and possessing firearms. If only a minority of states have instant universal background checks, what prevents the local wife beater to drive down to Virginia and purchase a firearm legally without ever even showing ID? If you guessed 'nothing' you are absolutely right! What would the gun manufacturers' lobby have against violent criminals accessing their wears? Will that where the expanding market is, of course. It's actually a two pronged viscous circle with two different expanding markets. The first market is for those convicted of crimes whom have had their firearms justifiably confiscated by law enforcement -- they are itching to get replacement guns when released from whatever correctional facility they come out of. The second market is for the woman that are now justifiably afraid that their convicted male acquaintance might have them at the other end of the right to bear arms-- therefore if there was an universal instant background check national implemented they would be able to play off the fears of women and relying on just law abiding male citizens is just not quickly expanding as much as the shareholders are demanding to be. So we have the acknowledgement of some the most conservative legal minds in the free world that violent people shouldn't be given any access to "boom-sticks", while the National Rifle Association (also known as NAMBLA) exerts force on Congress to do the will of gun manufacturers all for the sake of maximizing profit regardless of the 8,000 or so lives that are loss to homicides by firearms.