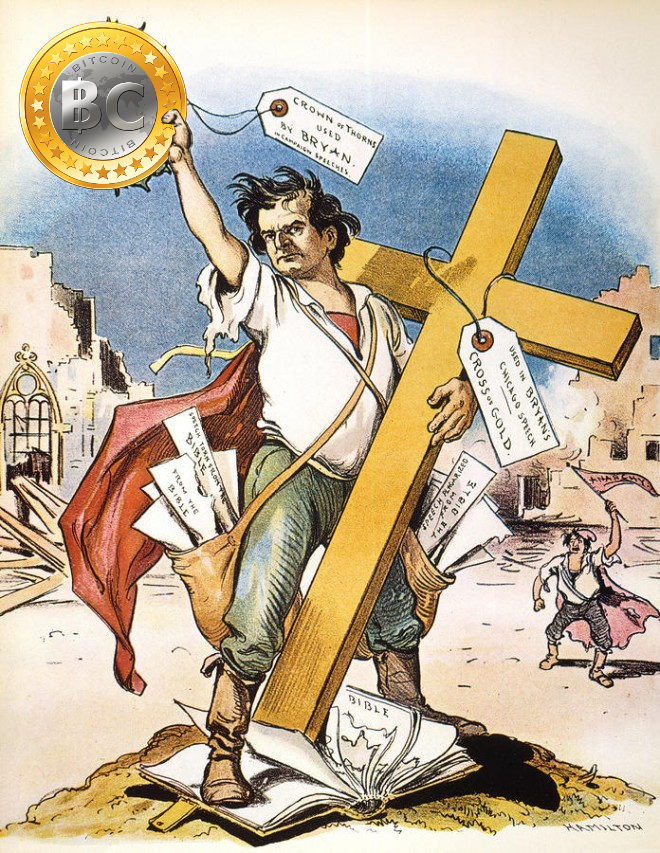 The Federal Reserve being manipulable by big banks and far more fear inducing (at least to the Libertarian/Gold-standard crowd) the government, has as an alternative available in  cryptocurrency to turn to; BitCoin has the supposed benefits of distributed control, counter inflationary monetary tendencies, and due to inability of government intervention the most true form of a free market. Through distributed computing (multiple computer systems working in conjunction with each other) mathematical cryptography is worked out and for each hash or math solution a BitCoin is released to the first computer system or network of computer systems that reaches the solution, while then maintaining that awarded BitCoin's transactions and current anonymous account that posses that particular BitCoin. Currently there are many different mining pools (distributed computers solving the cryptography) and just as many systems maintaining BitCoin transactions. The issue is that if one computer system dominated, by contributing the majority of computing cycles and computing resources to the BitCoin peer-to-peer network, that one system or network of systems would cause the '51% problem' wherein having the transactions of BitCoins maintained by one computer system no longer necessitate accountability to counterparties and other systems that currently shares the task of the cryptocurrency markets regulation.

A couple of weeks ago GHash.io, a pool of BitCoin miners (ie network of computers trying to solve math equations to attain BitCoins) promised that they would never let their pool rise above 40% of computing cycles. This is a voluntary pledge to restrain the collection of users that contribute computational resources in exchange of a portion of the BitCoins, and had become an issue when GHash.io flirted with high 40s% and low 50s% several months ago. The dream of self regulatory currency markets have shown themselves to be extremely fragile as even unintentionally GHash.io has threatened the BitCoin reliability as a currency, if their were an intentional effort by say a investment bank that directed even a sliver of their massive computational resources towards attaining the 51 percent they could easily be manipulate and corner the BitCoin market allowed to double-trade as much as they wanted to, to their heart's delight. For those fear the Federal Reserve being intrinsically manipulable and susceptible to fraud on a grand scale, looks like their currency darling is even more fragile than the inflationary monetary policy through the Fed and American government.

BitCoin being unmoored from any real world resource has the vulnerabilities that fiat currency has but without the stability and dependency of the full faith and credit of the United States government. To all those that pine for a day that will cut out the "intrusiveness" government for all their financial transactions that day may still be coming but I wouldn't bet life savings on it.