What Israel should learn from Stephen A Smith's mistake. Stop being violent!

Israel Prime Minister's spokesman on CNN confirmed that the lone power plant in Gaza was destroyed, but not by Israel because IDF would never target it.  IDF had been capable of turning off all electricity and did so upon the initial ground invasion. So temporarily turning off the lights is something that the IDF will do, but not permanently? Hamas doesn't have the ordinance to cause the destruction that the IDF is obfuscating responsibility for, or Hamas does have that capability but have only shot those ordinances towards their own side?!?

According to Israel killing Palestinian civilians (as 80% of the death toll have been) has never been intended... IDF is so incompetent that they only kill 20% of their intended targets! Either IDF should stop shooting missiles randomly into densely populated areas or stop lying that they aren't intending to kill as many Palestinians as they believe they can get away with.

Stephen A Smith, ESPN commentor, recently apologized (for the 3rd time) for placing blame on the victims of domestic violence for possibly "provoking" the violence. This is akin to Israel's eternal defenders that justify indiscriminate violence towards Palestinians because Hamas provoked Israel into barbaric mass violence. Both Stephen A Smith and Israel are trying to defend violence that is abominable and indefensible. And yet there will be those that read this analogy as being antisemitic but understand that the the twisted justification of domestic violence is horrible.

Don't want IDF to be in the same category as wife-beaters? Stop defending their hyperviolent actions. 3 Israeli civilians dead, 1,100 Palestinians killed (880 being non-combatants); but math has a known bias against Israel, right? 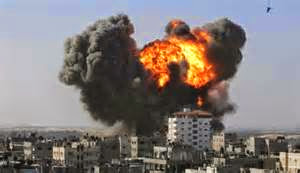